I am still into divers watches and especially like to swim with them on. I was set on the basic Omega diver 300 M. Solid, classy, classic and a unique bracelet that I really wanted to own.So I walked into a shop to buy a new watch. Unfortunately, I started trying on other watches and tried on a watch I hadn’t thought about before, the Diver 300 M Chronograph 44mm.
Now I have always toyed with the idea of buying a chronograph, as I never had one before. I love the look of the mini-dial complications, particularly with a more classic style. The main reason I have not purchased one before was simply because of the cost, although I was looking at some classic chronographs recently, including the unique Hanhart Tachytele.The thing about the diver 44mm chrono is that it has a hell of a presence. As soon as you see it in real life it challenges you to try it on. Frankly the car analogue feels like a black Landrover Discovery or BMW X5,exuding gravitas, somewhat refined but feeling that utility as well. 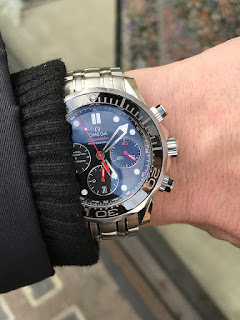 As I have a smaller wrist I was initially drawn to the 42mm, but actually seeing them in the flesh the inner dials on the 44mm just looked a bit better spaced and a more appropriate presence for my personal taste.It’s a solid piece. Not the biggest at 44mm, and the dial being slightly inset due to the deeper vertical of the case looking a tad smaller then 44mm (check out the Zenith Pilot Type 20 Grand Feu – 60mm !!!). In addition it’s not a thin watch, again not the thickest of watches, but one that clearly announces its presence. 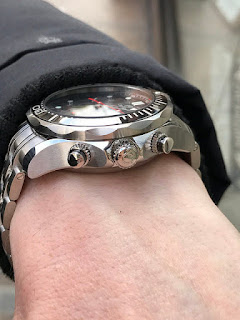 I have to admit to the guilty secret of having a small wrist but loving large watches. I had a 44 Breitling Colt and loved it, and just think these watches are cool for my taste. I frequently switch between styles, looking at the Omega Speedmaster Racer and almost buying the Heuer 40mm classic- but currently I am in a larger watch mood.Before describing the watch I want to talk about value. Yes a subject that has become a bit of a joke with Swiss watches in the last few years, but this is a serious chunk of metal, engineering and exquisite jewellery making. Despite all that, it's one of the cheapest chronographs from the mid/upper tier swiss manufacturers.Talking about value it's worth mentioning the movement. To start, take a Valijoux 7750 (ETA 7753) chronograph movement, a heavy duty, proven, popular and reliable movement. Redesign with a column wheel mechanism (Valgranges A08.L01) and then re-engineer for the Omega co-axial escapement and add a silicon balancespring. Nice!Moving on to the strap, one of the striking features unique to the Diver series in Omega’s range. It retains the original complicated 5 link construction, with the two links either side of the middle having further strips down each side. The downside to the physical construction is the somewhat complicated method of taking links on and off, with a fastening screw on both sides of each link. Luckily that only has to be done once … 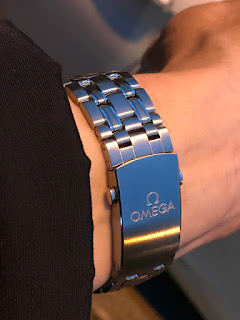 In terms of alternative straps there are not a lot ofoptions, at least from Omega. If you want a rubber strap there is only one, the black (with red inner) ENTZ strap (032CVZ003391), quoted in the UK to me at £360. There is also a growing range of Nato straps, including a black with leather lining for comfort (031ZSZ002056) and a black nylon strap with red sides (031ZSZ002041). However I am yet to be convinced by Nato straps on the larger chronographs as they go underneath and lift it, and as the diver chrono is not a shallow case already,this makes it a bit too tall IMHO. I will probably buy an ENTZ strap at some point when I can get a deal….. Due to the unique design of the watch you do need a strap specifically designed for it, rather than a general 21mm strap, otherwise there is a small gap against the case which doesn’t look great.The face of the watch itself is beautiful and cleverly designed to show a complex set of information but somehow allow you to focus onthe bit you need with ease. This is not an easy thing to do and says something about the straightforwardness of this classic design. I see lots of very expensive watches with chronographs, or other complications (such as power gauges) where it takes me a few seconds to work out what is going on every time I take a look !The face on my model is black and looks matt behind the double glare coated sapphire crystal. From different angles and light conditions it jumps through the spectrum and can end up at blue! 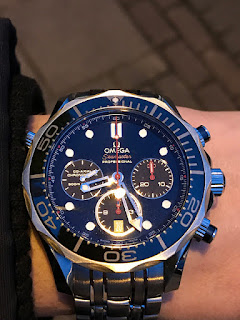 The hour pips are bright white with silver sleeves which makes them simultaneously clear and smart. The inner dials all have white fonts and lines and the date is also in white but a bold font to make it stand out, subtly, but just right. Lastly usage of a red chronograph second hand, red hands on the 30 minutes and 12 hour timer dials, the subtle red triangle pips against the minute numerics and the “seamaster” logo in red make enough contrast to set off the dial without overdoing it. The bezel is black ceramic but due to reflections and its construction it can appear dark grey as well as black in flashes. It has silver metal marking numbers completely smooth with the ceramic. The grip is described by Omega as “areoral” and has a smooth wave like grip. A grey/silver triangle at 12 o’clock with a lume pip surrounded by a silver metal sheaf finishes it off. The two chronograph control buttons have lovely black rings to identify them (the blue face watch has blue bands). Worth noting that unlike some diving chronographs, Omega actually certifies the chronograph buttons to be used under water. Finally on the face the sapphire crystal glass is slightly raised from the bezel. The overall effect is purposeful and smart, at home in a lounge suit or a diving suit. 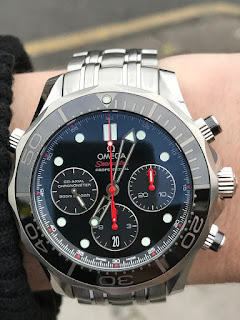 The date is changed by a push button in the middle of the decompression valve. Inside the box a plastic tool is provided to do this easily and without scratching the watch. Whilst on the topic of the box, its a beautiful chunk of wood like material, with a metal Omega push button opener. Inside there is a hidden pocket containing the date push and a cream travel pouch.The watch has a metal backplate engraved with a Seamaster logo. This engraving is deep set and the construction of the back plate gives a quality feel that some have compared to a minted coin.
It's not a light watch, although not excessively heavy, but certainly can’t be ignored during the day.As the Planet Ocean is the better selling Omega divers these days and 2017 is the speedmaster push, although not rare, the Diver 300M chronograph does have a more unusual/individual demeanor.The five segment strap together with the beautiful and functional face and its depth and size has a punchy gravitas without going overboard. It's a stunning watch to enjoy throughout the day. 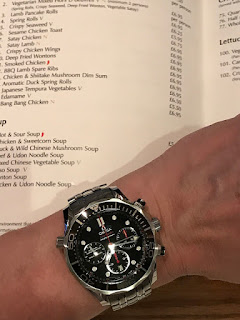 I guess in life you pays your money and takes your choice.

You can either opt for a watch that you don’t notice on your wrist, doesn’t look flashy or expensive from a distance and has a subtle demeanour, or you can throw your Leica M on the black leather back seat, crack the roof open, put on dark glasses and floor the accelerator. 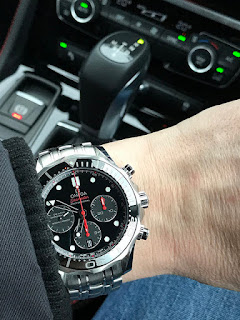 A little excitement, wrapped up in a jewellers case, in an otherwise mundane day … 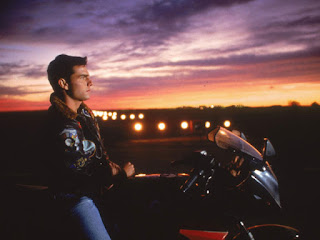 A watch amateur meets Maverick, aka. the Rolex Air King 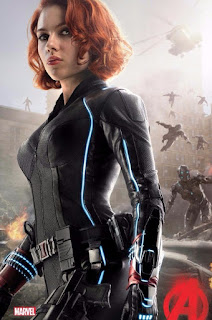 A watch amateur meets the Blue Widow, the beautiful Avenger ;)